But for those of us who prefer to drink on occasions where 2 or 3 are gathered, the ritual of raising a glass is bound to emerge at one time or another.

The first time I really experienced Mennonites in the act of toasting was back in 1989, when I was traveling through the Soviet Union with a bunch of other Mennos on one of the infamous heritage tours. About five or six days into the tour, we had dinner on a collective farm in Ukraine. Our hosts laid out a feast for us and then, before we could eat, one of them raised a glass and toasted our visit. I can’t remember what was said but I remember that it was what a toast should be – short, witty and kind.

And then they turned to us. It was our turn to offer a toast.

My whole tour group froze in our seats for half a beat and then turned, as one, to the person we all deemed least likely to embarrass us – thankfully, not me. Most of us were terrified of the idea of giving a toast. We knew how to do wedding speeches, to be sure, and we could speak freely at a funeral. But these weren’t skills that would help us now.

The more worldly of us might also raise a glass at Christmas and toast the cook or family gathered about but we would do that without wit or eloquence. And we had just been shown by our hosts that both were expected.

Our designated toaster looked no less apprehensive than the rest of us felt when he rose to speak. We had chosen him because we assumed from his worldly success that he was well-spoken and had encountered such situations before.

And he did speak well enough. After a few words of preamble that I have forgotten, he said:

It was a fitting enough toast, given that we were international visitors. And it was complimentary without being overly sentimental. It didn’t get us laughing but that’s ok. We all happily raised a glass and moved on with the meal.

Only a few of us knew that our spokesperson had not whipped that toast up on the spur of the moment. He had, in fact, first heard that toast a few days earlier when four or five of us had wandered into the hotel bar in Moscow and shared a drink with the musicians playing there that evening. Those musicians had toasted the language of music but they’d also handed us a toast to recycle at will.

That was when I learned the first rule of toasting:

It should come as a great relief to all the nervous Mennonite drinkers reading this to know that a good toast does not need to be an original work of genius. This means that not only can we steal the words of Muscovite musicians, we can draw on our own heritage to craft our very own toasting traditions.

This might seem a challenge given that our heritage consists mostly of sermons, prayers and dour admonitions. But I am always up for a drinking challenge.

There are definitely parts of our heritage that don’t adapt well into toast. I have spent way too much time trying to rework benedictions and various pieces of scripture into potential toasts and none of them really work.

There’s a peace that surpasses all understanding. May that peace be with you now and into the future. (raise glass)

Well, maybe that would work in the direst of toasting emergencies but your fellow-imbibers are too likely to burst into “Amen” rather than “Cheers” and, feeling like they have just woken up at the end of a worship service. Then they would mistakenly rise from their seats to depart rather than tuck into the meal in front of them. Which is really not what you want when you toast.

Situations like this illustrate the importance of the second rule of toastmaking:

Choosing the topic of your toast requires knowing what would be acceptable and what would fall flat. You can toast the people in the room or the things that reflect the values they hold in common. Or the dead. What with our great affinity for all things funereal, it is always ok to toast our dearly departed.

Notwithstanding rule #1, I suggest you avoid repeating verbatim the various “toasts for all occasions” that one can find on the internet. Many of these harp on sexual themes and, as we all know, Mennonites do not talk about sex unless it is to cast judgement.

You also typically want to avoid controversial subjects or people, lest some refuse to toast. But there’s still plenty of material if you know your audience.

Otherwise, I suggest digging into our collective foibles a bit for a toast.

Friends – we are here in the peaceable kingdom. Let us toast our enemies. If they pursue us, may we turn back to help them. If they hate us, may we love them. And if they get us mixed up with another conference of Mennonites, may we — well, may the Lord forgive our wrath.

I like this one but, yes, this toast works best if you can assume a Mennonite audience that has held onto the peace position, that knows the Dirk Willems story, and who is sick of being confused with the Amish, Old Order or any other group of Mennonites that is not them.

You’ll notice that toast also had a certain rhythm to it. That’s because of the third rule:

Say the same thing over and over again

Toasts love a little bit of repetition. Which is great, because so do Mennonites. Sure, sometimes in our case, that means having to listen to the same arguments about the same controversies every week for decades but it can also mean that we can use our talent for repetition to turn out a few good toasts.

I don’t advocate re-using the exact same toast with the same audience. Instead, I advocate using repetition in the structure of the toast – like the repetition in the Beatitudes or 1st Corinthians 13. Again, do not actually quote or reference the scripture. I mean something like this:

And, yes, a toast is also the perfect opportunity to slide in a little passive aggressive dig at various decision-makers in the congregation.

That’s because repetition works best if you also follow the fourth rule:

A twist, in fact, can work even without repetition.

The Sermon on the Mount isn’t just there to give us a lesson on the value of repetition. It can also give us a model for the toast with a twist. My favorite formula for a toast uses the classic “you have heard it said…but I say unto you” structure. Here, you take something cliche and then add a little twist and raise a glass.

You have heard it said that Mennonites are dull, earnest white folks with a penchant for passive aggression. But I say to you – we’re not all white.

Here’s to an inclusive Church that welcomes dull, earnest, passive aggressive types of all colours and origins.

It’s an easy formula with countless options easily personalized to whatever type of Mennonite drinking audience you might be facing.

And best of all, it follows the fifth and final rule:

Shorter than a sermon. Shorter even than the faith testimonial of the shyest and youngest baptismal candidates.

Honestly, this cocktail is just Hemingway’s Death in the Afternoon. I thought of adding some rhubarb bitters just to make it a little more Mennonite, but rhubarb and absinthe was not something I could even consider. Instead, I suggest that all of my readers out there without a bottle of absinthe in their cupboard just find a way of substituting star anise. I understand that some groups of Mennonites are very fond of star an

ise. So there it is.

Meddaschlop is the Low German word for an afternoon nap, or siesta. It’s a good idea to have a meddaschlop if you intend to be up into the wee hours drinking and toasting all the good that is in (but not of) the world.

Swirl absinthe and simple syrup in champagne flute. Top with sparkling wine. Propose a toast. You know how. 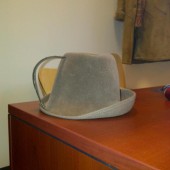 Of Trees and Tinsel in Mennotopia*

Me and all the Menno-Tweeps

Creatures of the (Menno) Night